My name is Savannah, but I go by Sav. My pronouns are she/they. I'm from Muskegon, MI, but I live in Silver Spring, MD now.

I've always loved stories. I was an avid reader when I was a kid, and when life became difficult, I found solace in those stories. As I got older, I realized that I didn't just enjoy reading stories, but I loved telling them as well. I discovered away to do this in middle school, when I took my first theatre class. I've been doing theatre ever since.

I learned about the Players when I came to Olney for a costuming apprenticeship. Learning that they were a self-contained theatre company really appealed to me because it was an opportunity to use the skills I learned over the course of my apprenticeship and to get back into acting. I'm also excited to try my hand at teaching; I've been toying around with the idea of eventually teaching acting classes in a university setting, so National Players is a good opportunity to figure out if I actually do that. The plays that were chosen for Tour 72 really stood out to me as well; A Raisin in the Sun and A Midsummer Night's Dream are shows I've wanted to perform in since I was maybe 13 years old, and I wanted to jump on the chance to finally do it.

I'm most looking forward to bringing theatre into areas that would otherwise not have it. I grew up in a town that didn't have a huge theatre scene -  I was honestly lucky it was taught in my school at all, so I'm excited to bring theatre to kids (specifically) who grew up in places like I did, who may not have the chance to see a play without the tour.

After the tour, I hope to continue performing and costuming in the DMV.

I use my free time to continue storytelling, just in a different way - I play a ton of Dungeons & Dragons lol. My main game has been going for almost 2 years now with a group from the 2019-2020 OTC apprentice class. I also have a D&D actual play podcast with 3 of those former apprentices. It's called Bad Idea: A D&D Podcast or BIDDPOD, for short. 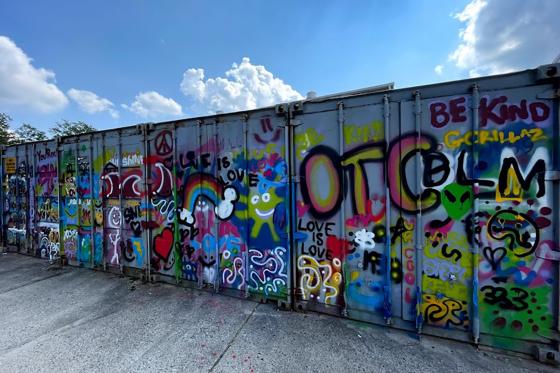 This summer at Olney Theatre Center was festive for multiple reasons. We were able to...