Moving On Up: Graduating Apprentices

You might be wondering why Olney’s blog has been a bit quiet lately. And the honest truth? We haven’t had Taylor Lamb, our former Marketing and Developing Apprentice, around to keep us all on task. The beginning of the summer season is a busy time of year at Olney, and one of those reasons is apprentice turnover. Over the last few weeks, we have been saying tearful goodbyes to several apprentices and joyful hellos to others. Before we start to introduce you to our new apprentice class, we thought we would honor the ones who have left - and see what they are doing next!

Theo Adelberg, Stage Management. Theo most recently served as the Assistant Stage Manager on Mary Stuart, where they were instrumental to the show’s success throughout the rehearsal process and into the run of the show. Before Theo’s contract ended, they were backstage tracking props and quick changes, and making the turntable spin. Prior to Mary Stuart, Theo worked on every show this season in some capacity. Notably, they called act 1 of Ken Ludwig’s A Comedy of Tenors for their capstone project. From their nerdy love of paperwork to their friendly desire to get to know each cast to their consistently full communal candy bucket, Olney has treasured everything that Theo brings to the table. I would also like to take this moment to plug their original podcast, LGBTimeMachine!

Next up, Theo is working as an Assistant Stage Manager with Santa Cruz Shakespeare this summer in Santa Cruz, CA. After that they will be back in the DC area to pursue Freelance Stage Management, as well as work on getting their first novel published!

Elizabeth Morton, Costumes. Most recently, Elizabeth was also backstage during Mary Stuart orchestrating quick changes and tracking costume pieces. I mean, come on. Did you see Megan Anderson’s (Elizabeth I) final costume? (Now that the run of the show is over, we can gush without worrying about spoilers.) And did you catch how fast that change was? That’s all thanks to Elizabeth. She was also the Assistant Costume Designer for Ken Ludwig’s A Comedy of Tenors. She put particular time and effort into Mimi’s green dress (if you saw the show, you’ll know). On a personal note, Elizabeth was one of my roommates for most of the past year. I can tell you that in addition to being an impassioned artist, Elizabeth is a true friend and a great person to make late night Taco Bell runs with.

Pretty soon, Elizabeth will be starting a second apprenticeship at Studio Theatre in downtown DC. She will be working as their Marketing Multimedia Apprentice, helping to create graphic, photo, and video content. Elizabeth said she has loved the experiential learning aspect of her costume apprenticeship at Olney, and it’s a huge part of why she decided to apply for another apprenticeship in (one of her) other passions, marketing and graphic design.

Jordan Watson, Costumes. We had to lose them both at once :( … Jordan, our other former Costume Apprentice, was most recently backstage for Ken Ludwig’s A Comedy of Tenors, a show that was riddled with quick changes and extravagant costumes, which she and Elizabeth also helped build in the shop. Jordan was also the Assistant Costume Designer for Mary Stuart. Jordan is one of the most hard-working, centered people I know. Though a year as an apprentice can be difficult and at times exhausting, Jordan had a wonderful attitude and a calming presence at all times. She also makes AMAZING cake. Catch her watching the Great British Bake Off to decompress after a long day of tech.

Throughout the year, Jordan was working hard on her graduate school applications. It was an amazing day when she announced that she had been accepted to her top choice. In the fall, Jordan will be pursuing an MFA in Costume Design at the University of Florida. Congratulations, Jordan!!!

Meghan McVann, Production Management. Meghan’s apprenticeship technically ended a couple weeks ago, but we couldn’t say goodbye to her just yet. She was hired to take over Theo’s track for the remainder of the run of Mary Stuart. For her capstone, Meghan also served as the Production Manager for Mary Stuart. Among many other tasks throughout the year, Meghan had the near impossible task of coordinating countless schedules for design and production meetings. I’m stating this because every time I received an email with a calendar invite from her, I was in awe of how she did it. Confident, positive, and friendly, Meghan has a perfect personality for an arts manager or administrator. She also has a background in dance, so she can whip out some pretty impressive moves if you catch her at the right time (usually sipping on some nice rye whiskey).

Just a few hours ago, we said goodbye to Meghan. She is currently on a train to New York City, where she is pursuing Production Management and Arts Administration. The DMV will miss you, Meghan, but we can’t wait to see the amazing things you’ll do!

Turner Hitt, Education. It’s hard to believe that a year has passed, but Turner started out their apprenticeship around this time last year. They were a critical and special part of Olney’s summer camps, and continued their love of teaching throughout the year, visiting many classrooms in local schools that partner with Olney. They were a huge part of the Our Play program, which facilitated students’ creation of their own original plays as part of our Arts Integration efforts. Turner also does a tremendous amount of work with our touring company, National Players. For their capstone, they created lesson plan templates for National Players’ classes. Turner is an amazing friend who is known to readily share their crab rangoon if you’re having a rough day or simply are craving some Chinese takeout.

Lucky for us, Turner will be sticking around the DC area pursuing freelance work in theatre education and as a teaching artist!

Kaitlyn Sapp, Sound. Though we already feel the absence of Kaitlyn, we are happy to say she will be coming back to Olney soon to mix Children of Eden for our Applause Series. As one member of a two person sound department, Kaitlyn was always working hard. Recently, she mixed Ken Ludwig’s A Comedy of Tenors for her capstone project. On top of her Olney work, Kaitlyn also had some local freelance work throughout the year. She is an excellent sound designer. She also happens to be an excellent mixologist and often made the apprentice class themed margaritas for special events. She is one of the most selfless people I’ve met, always offering to give people rides or bring back late night McDonald french fries for the house.

Up next, Kaitlyn will be the QLab Operator for Signature Theatre's Blackbeard, collaborating and sound designing a couple local theatrical projects, working as a technician at Bowie Performing Arts Center, and mixing Love Sick at Theater J in the Fall. You know, no big deal...

Michelle Cooman, Electrics. Michelle! My other former roommate. Let me start by saying thank you to Michelle for not only tolerating my late night 80s solo dance parties, but encouraging them. What a champ. Michelle is one of those people who knows her stuff, and her confidence in her craft is reassuring to everyone around her. She loves to be challenged, which plays into an excellent work ethic. For her capstone, Michelle recently programmed Ken Ludwig’s A Comedy of Tenors on our Mainstage. Also, if you’re looking for a hand crocheted blanket, you should hit Michelle up. She is a tireless crafter.

After returning to work as a counselor at camp for the summer,  Michelle will be running lights for Fairview at Woolly Mammoth Theatre Company and then freelancing in the DC area.

Taylor Leigh Lamb, Marketing and Development. And last but not least, Taylor! You are familiar with her excellent work on the blog (and if you follow Olney on Instagram or Facebook, you’ve seen her social media work), but Taylor did much more in her time as an apprentice. She too has an insatiable appetite for learning and went above and beyond Olney’s expectations of her. From writing grants to organizing the annual Gala, Taylor always had a positive and gracious attitude. One of my favorite parts of this year has been going to see shows in Baltimore and DC with Taylor (even if the trips were sometimes unsuccessful). I love listening to Taylor’s opinions and ideas. As a playwright herself, she has a profound respect for and understanding of the intricacies of storytelling. She is also a rare and dependable friend (who throws the best parties).

Here are some final words from Taylor about what she is doing now/next: Immediately after my apprenticeship, (aka as you read this!) I will be in Charlottesville shooting the web series Black Enough. It's an intimate and poetic web series about the Black college experience. I have a small role in the production, and am also on the digital media team! (As a digital media team member, I wouldn't be doing my job if I didn't ask you to please follow us on our social media).

Right after that, I will be going to American Shakespeare Center's Theater Camp to serve as a Residential Directing Assistant. And then when that's over, I'll be heading to Baltimore Center Stage to serve as their Special Events Coordinator!

I'm so excited for my future, and very grateful for the skills that my apprenticeship at OTC gave me, because I know that it prepared me for all of these amazing experiences I'm having now.

To the outgoing apprentices and the ones who have already left, I speak for everyone at Olney when I say thank you for all of your incredible work over the past year. On a personal note, I have loved getting to know each one of you and thank you for your friendship from the bottom of my heart. Can’t wait to watch you all crush it.

P.S. - Meredith Beisel (our next Marketing & Development Apprentice) officially started this week. So the blog will be coming back strong from this respite! Welcome Meredith! (Look for a blog introduction soon.) 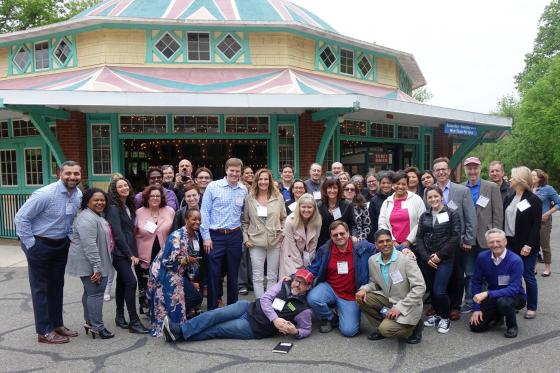 My Year in Leadership Montgomery 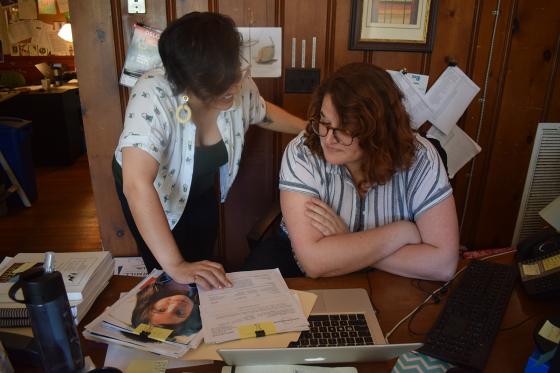 Casting the Children of Matilda

This week, we began rehearsals for Roald Dahl's Matilda the Musical, the next show...