At many theaters, the summer is a time of taking some time off, maybe leaving early on Fridays, and getting ready for the next season. But at OTC, we still have two shows running and are building the show that begins in late August - in addition to building, rehearsing, and performing the three National Players shows as well.

Even so, our staff still finds time to pick up a book (or two or in some cases even more) and enjoy the summer days.

I wanted to know what our staff was reading this summer, which book they enjoy the most, and why. I'm excited to add some of these books to my list, and I hope you are too!

First They Killed My Father: A Daughter of Cambodia Remembers
by Loung Ung

"A striking account of a young girl trying to survive the Khmer rouge with whatever family she can hold on to. I grew up with a girl who's parents fled Cambodia, they own the best donut shop in the world.  It is especially poignant as we head into tech for Cabaret."

"Loved it for so many reasons but mostly I was drawn to the eccentric, artistic and deeply real characters especially the mom, Bernadette. Loved the relationship she had with her daughter and her need and determination to be artistic and explore— even when others didn’t “get” her and tried to Bring her down. Loved how the people thought to be the enemies ended up being the ones who brought the family together and in a sense saved their lives. Loved how human their mistakes were despite seeming catastrophic and the forgiveness they showed each other. In the end, all we need is love and understanding from our family and a little bit of adventure— and artistic outlets! Bernadette has an undeniable need to create and explore but she’s full of insecurities and fear so she loses herself, literally and figuratively. It’s the love of her daughter (and husband) that “find” her."

The Big House: A Century in the Life of an American Summer Home
by George Colt Howe

"It is a memoir of the author's family's summer house, written as they were planning to sell the house after the older family members died. He talks about the part this rambling house on the New England coast played in their collective family memories for over a century. It was just a lovely book and I cried when it was over."

A Legacy of Spies
by John Le Carré

A People's History of the United States
by Howard Zinn

The Book of Dust
by Philip Pullman

"It's the prequel to one of my favorite fantasy trilogies His Dark Materials. An intriguing origin story for our main heroine Lyra."

The Woman in the Window
by A.J. Finn

"I love his world-building skills, the way he comes up with fantastic concepts (in this case a world in which people hibernate over the winter as animals do), and his humor."

I'm Supposed to Protect You From All This: A Memoir
by Nadja Spiegelman

The Nickel Boys
by Colson Whitehead

On Desperate Ground: The Marines at The Reservoir, the Korean War's Greatest Battle
by Hampton Sides

"The book that had the biggest impact on me was Dear America: Notes of an Undocumented Citizen by Jose Antonio Vargas. His story is a particularly important one to hear now as immigrants in general and undocumented immigrants specifically are being demonized. Vargas was brought to America when he was 12 but didn't learn of his illegal status until he was 16. His is in many ways an exceptional story of achievement, including a successful career as a journalist at The Washington Post, and he acknowledges that he is perhaps the most privileged undocumented citizen in America. However, his pain at having to conceal his status for so many years, the fear that accompanies daily interactions that threaten exposure and deportation, and the frustration at how little most people understand the difficulty of navigating the American immigration system, were eye-opening to me. No matter what immigration policy prescription you favor, Vargas' story puts a much-needed human face on the plight of the undocumented members of our society."

Submitted by Joshua Ford, Director of Marketing and Communications

Carry On
by Rainbow Rowell

City of Girls
by Elizabeth Gilbert

"City of Girls is written by the woman who wrote Eat, Pray, Love, which I've always wanted to read. I bought both, but ended up reading this one first because it was about a girl who went to NYC and worked in theater. It ended up becoming one of my favorite books and I've recommended it to everyone."

In An Absent Dream
by Seanan McGuire 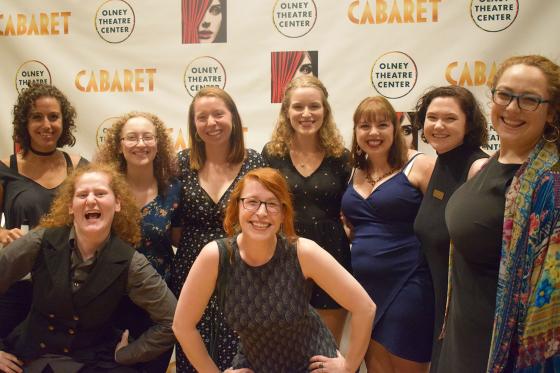 Our company managers provide an in-house meal for everyone involved with Cabaret tech.