It’s been just under a week since we opened, and so far audiences have been thrilled by Mary Stuart. The production runs through June 9, but May has been flying by so be sure to get your tickets soon.

Earlier this week on the blog, we introduced Eleasha Gamble, our fierce Mary Stuart. This week we are introducing the force behind Elizabeth I: Megan Anderson. Megan is an important part of the OTC family; her past credits here include Aubergine, Our Town, Grounded, and Rabbit Hole. She is treasured for her talent, top notch work ethic, and delightful personality. As someone who also understands the culture of Olney as a teaching institution, Megan is a nurturing and friendly role model for the apprentices, and always appreciative of all of Olney’s staff. (And if you haven’t been seeing the reviews of Mary Stuart, she is absolute fire in this production.)

Tell us a little about yourself and how you started working in theatre?

I was born and raised in Baltimore. I'm the youngest of five kids and part of a really closely knit family. The first part I remember playing was Orphan Annie in a production my mom organized as a gift to our extended family on Christmas. We borrowed the church basement and sang along to the movie soundtrack.

What is special about the DC theatre community?

This is a tough one for me to answer because I don't work in DC that often (raising my kids made it tricky for a long time, but they're older now so, HIRE ME PLEASE!!). I have many friends who do though and who are constantly making fierce, exciting work. Whenever I audition in DC I run into people I admire and love, so I'm grateful to be part of a community where people lift each other up.

What has been exciting and/or challenging about your work on Mary Stuart?

This process has been nothing short of thrilling every single day. The story itself is so loaded with conflict, high stakes, deep connections, bold objectives. Everything is literally life or death, and Jason's script is full of muscle and language, and the roles are all juicy. Elizabeth could be seen as the villain here, and that's okay. It's so exciting to me to try to understand WHY people behave the way they do. I love that in playing both Elizabeth and Kennedy, I get to explore so many ways of connecting with Eleasha as Mary. I get to love her, hate her, envy her, want to protect her, fear her, worship her...which makes everything richer. I'm also so so thankful for Jason and the whole company for creating a space to play and explore that's exciting, smart, safe and supportive.

What is a favorite role you've played? What is one of your dream roles?

I've been blessed in my career and have played many dream roles in amazing plays. THIS ROLE! I'm playing the QUEEN! Some of my favorites include Stella in A Streetcar Named Desire, The Pilot in Grounded, Olympe de Gouges in The Revolutionists. It's too hard to single them out! My dream role is my next job!

When you aren't performing, how do you like to spend your time?

When I'm not performing, I'm with my girls, watching them grow way too fast and marveling at them.

Who are your theatrical icons and why do you admire them?

My theatrical icons are the people I'm working with in real time. They're the real deal and I admire them because they're out there making it work and killing it with their talent and dedication. I work with amazing actors who are also amazing people on a daily basis. If I happened to meet Janet Mcteer or Mark Rylance one of these days, or Peter Dinklage, that'd be okay with me!

Today is my last day as the Marketing and Development Apprentice at Olney Theatre Center.... 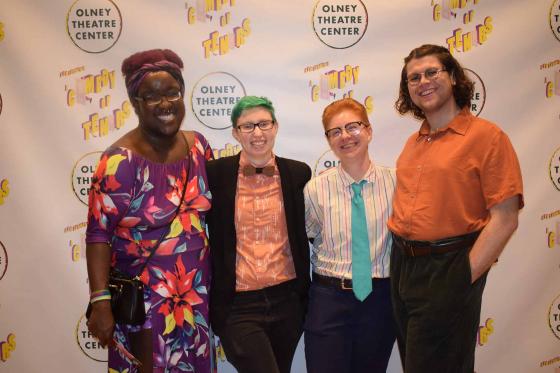