OTC apprentices typically culminate their year with a capstone. Usually, this means that the apprentice gets to take on more responsibility for a project, such as serving as the Assistant Master Electrician for lighting apprentices or working as Wardrobe Supervisor for the costumes apprentice. However, because OTC needed to cancel the rest of the 2019-2020 season, many apprentice capstones were canceled as well.

In place of our missing capstones, Maddy Dozat (carpentry apprentice) suggested we do a “play-on-page” to replace or supplement our capstone projects. The idea was to choose a play then design and plan it as if it were an actual production in OTC’s upcoming season. We could do everything outside of actually hiring the cast and building the show.

Starting around April, we began meeting every Friday to talk about our project. First, we picked a show: Hamlet. Hannah Ensign (education apprentice) and I chose to co-direct the show and came up with the concept. We created a “no-boys-allowed” Hamlet, where all of the members of the cast were either female-identifying or non-binary. (Click the links for more information on what it means to be non-binary or use they/them pronouns.) Hannah and I presented our concept to the designers, cut the script, double-cast some roles, and attended all of the production meetings to help keep a cohesive concept for the production.

Gabriela Schulman, casting and artistic apprentice, cast the show for us using DC actors. Hannah and I had a meeting with her early on where we talked about political figures and celebrities who resembled our ideas for the characters. She put together a list and helped us decide who to cast in this imaginary production.

Meredith Beisel, marketing and development apprentice, wrote a press release for the production. She included some quotes from Hannah and me about why it was so important to do this show in 2020. Additionally, Meredith designed the title graphic and compiled some inspirational images that could show to a graphic design agency.

Maddy Dozat created the scenic design for the show. After we decided on a seating arrangement, she collected research images for inspiration, made Vectorworks renderings, researched furniture and props, and also created a full model of the set. Her design features a lot of marble and sleek, modern furniture to help bring the story of Hamlet into a contemporary setting.

Kathyrn Burke and Leila Vetter, electrics apprentices, worked together to create the lighting design. They pulled inspiration images and created several renderings for specific moments in the show, such as when Hamlet kills Polonius. They also worked together with Maddy to design some projections for the show. Their lighting story emphasized the idea of surveillance and feeling trapped, which was one of the main themes we discussed in production meetings.

Caitlin O’Brien, costumes apprentice, designed the costumes for the show. She did an incredible amount of research for each character to plan her designs. Modeled mostly after American political figures, her designs clearly distinguished each character and the power (or lack thereof) they held in the world of the play. She and Maddy worked together to design a family crest for our house of Denmark.

Our other costumes apprentice, Savannah Gomez—in addition to acting as Wardrobe Supervisor and creating a full change plot—designed the hair and makeup for the show. Building off of Caitlin’s research, she helped tell the story of our characters through the way they choose to present themselves with hair and makeup. Her renderings included a full ghost makeup look for Hamlet’s father, as well as simple “chapstick-and-mascara” look for Rosencrantz and Guildenstern, who were modeled after political interns.

Eleanor Hill wrote contracts for all of the designers—we even signed them. She also reached out to our cast and asked if they’d be willing to film a short monologue of their character for us to show at first rehearsal. Big thanks to Temidayo Amay (Hamet), Tonya Beckman (Gertrude),  Donna Migliaccio (Hamlet’s Father), Emily Townley (Polonus), and Farrell Parker (Laertes) for sharing their time with us, recording monologues, and helping us create this project!

Tashi Quinones served as our Stage Manager for our show. Although a lot of her work would usually take place once rehearsals started, she prepped paperwork for blocking, line notes, rehearsal reports, cast lists, info sheets, and more. If we were truly mounting this production, we would be ready to step into the rehearsal room tomorrow thanks to her work.

The project culminated in a mock first rehearsal. Usually, when OTC begins a new show, we hold a first rehearsal where staff and guests meet the cast, hear the design concepts, and listen to a read-through. We held a similar meeting, invited the rest of OTC’s staff, and presented our designs.

Although COVID-19 has undoubtedly disrupted our apprenticeships and the work we were hoping to achieve, I’m so proud of the work we’ve done and the show we put together on our own initiative. And, hey, if you’re looking to produce a new take on Hamlet designed by an entirely female-identifying and non-binary group of artists, drop me an email. 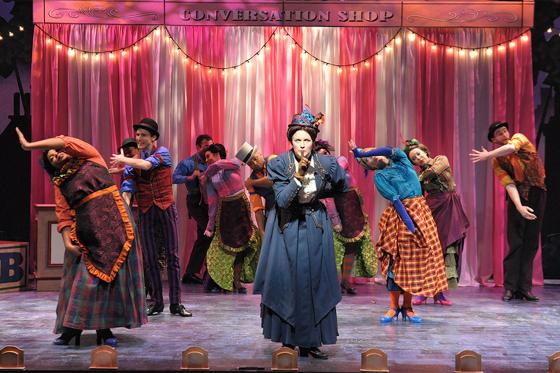 Video of the Week: Supercalifragilisticexpialidocious

This week we're taking a delightful stroll back to Mrs. Corry's Conversation Shop to bring... 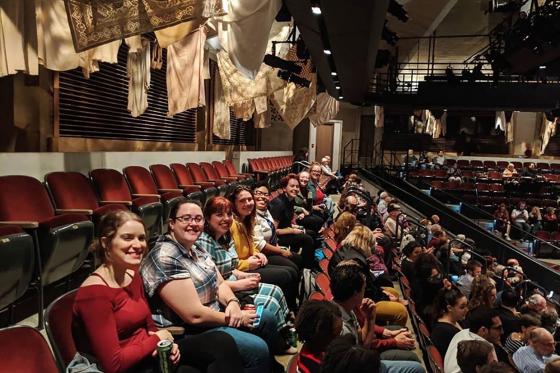 Summer is usually an exciting time for the OTC Apprenticeship. In May, some apprentices complete...